This past weekend, the Deadwood movie came out on HBO. My wife had invited our friend over to see the movie, so I watched a few episodes beforehand and read a summary of the three seasons. Despite the fact that I was born and raised in the west, I’ve just never been into westerns. Nevertheless, I thought the series was well-written and provided complex characters.

When the movie ended, I was interested to hear what my wife and our friend thought of it. The sentiment from both was that they enjoyed it, but that the movie, which takes place ten years after the series ends, pretty much left everyone and everything the way it had been. There were no surprises. “I’m not sure we needed the movie,” my wife said, thoughtfully.

Initially, I believed that I didn’t care about Deadwood, but as the weekend progressed, I found myself bothered by its ending. I remember when the series first came out, a female friend of mine proclaimed that no one should be upset by the way women are treated in Deadwood because “that’s the way it was back then.” I’ve always thought that response is far more complicated than its simplistic facade. Why do we want to watch a show where women are treated in a way that supposedly ended long ago? I propose it’s because it actually hasn’t ended. We often identify with characters. But with whom are women identifying when they watch abused hookers from the 1800s (or the lovable, yet miserable, alcoholic, Calamity Jane)? Even more disturbing, with whom are contemporary men identifying? Of course, one doesn’t need to identify with characters to enjoy a story, but that still leaves me with the question: then why are we watching men abuse women in television shows meant to entertain?

Good storytelling is powerful, though. Even I felt myself sympathizing with the brothel’s pimp, and main character, Al Swearengen, played by the talented Ian McShane. Swearengen is dying of alcoholism, in the movie, and wills his establishment to his favorite prostitute, Trixie. However, the first episode of the tv series was still fresh in my mind, and I couldn’t help but recall that Al beats Trixie for shooting a customer, who wouldn’t stop beating her. He tells Trixie she’s “bad for…business” and then steps on her throat until she squeaks out “I’ll be good.” At the end of the movie, though, due to convincing writing and good acting, I felt as though Al loved her and that Trixie (who earlier urges a young prostitute to consider that she’s been gaslighted into turning tricks) has just won by inheriting an establishment that will no longer “run girls,” as Al puts it.

I had similar feminist issues with Game of Thrones, although I was heavily invested in that storyline. Season 8 aside, I felt that most abused female characters (main characters, anyway) eventually found inner strength and exacted terribly satisfying revenge on their antagonists. Here are a few classics: 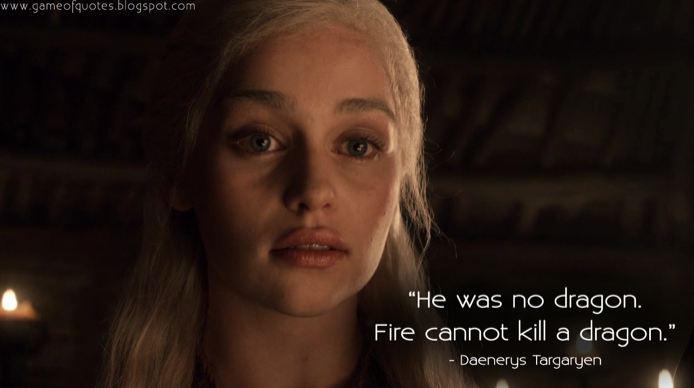 Dracarys for Stealing My Babies

Dracarys Down the Patriarch

Although these women’s situations are worse than I’ve experienced, I can still identify with having to deal with abusive men and the society that enables their behavior. The women on Game of Thrones find justice that the rest of us can only dream of. That’s the appeal of watching them suffer: my inevitable relief when they become empowered and take revenge.

Of course, the narrative does not always show an awareness that women are human but instead, often remains stuck in old notions. For instance, Daenerys gets raped nightly by her husband until she learns how to seduce him through her eyes. (Seriously.) Then, they fall madly in love, and yours truly—despite my inner feminist (or really, inner NORMAL PERSON)—felt sad anyway when Daenerys’ “Sun and Stars” gets cursed by a witch, who, by the way, had previously been gang raped by ol’ Sun and Stars’ men! I can forgive Daenerys’ Stockholm Syndrome, but I can’t forgive the authors for roping me into it nor for implying that if women would just “get on top” they wouldn’t get raped anymore and would be stronger for it. In fact, they’d fall in love.

Similarly, Sansa’s own repeated marital rapes are implied as necessary for her character development and for her own empowerment, as if we’re supposed to forget that, often times, victims of sexual assault become depressed, anxious, and suicidal. Of course, I was relieved when she escapes by jumping off a castle roof, runs through an icy river, and returns home to mobilize troops and win the north’s independence, but I cannot get on board with the sentiment that her strength could not have manifested but for her husband’s abuse. She makes such a comment to the Hound, implying that she would never have grown up without the rapes. To correct the suggestion that the audience should believe that rape, for women, can be good for their personal growth would have been easy. The writers could have had the Hound reply to Sansa’s statement that she had found her strength despite her husband’s abuse. Again, I can’t blame Sansa for trying to make meaning out of her trauma, but I resent the writers for asking me to do it, too.

I guess that’s how I felt about Trixie in the Deadwood movie. Who can blame her for her response to an abuser, especially when “that’s the way it was back then”? But why end the movie with the focus on comforting the abuser with yet another dominated woman rubbing his feet? I guess the scene’s comedy and sentimentality somehow eases our resistance?

I don’t need all abusive characters to die by dogs or dragons, but I can’t help observing that, many times, there’s an awful lot of sympathy and comforting and, in the case of Daenerys’ husband, reward for misogynistic violence. I also don’t need sexual assault narratives erased completely. These stories are valid. I’d just like more thought put into the narrative and an acknowledgement that women are not that different from men: we don’t flourish from rape.

For this month’s post, I’ve chosen Rita Dove’s “Persephone, Falling” for its use of timeless mythology and contemporary sarcasm to illuminate the patriarch’s method for maintaining female captivity.

Until next month: Dracarys Down Misogyny!

One narcissus among the ordinary beautiful
flowers, one unlike all the others! She pulled,
stooped to pull harder—
when, sprung out of the earth
on his glittering terrible
carriage, he claimed his due.
It is finished. No one heard her.
No one! She had strayed from the herd.

(Remember: go straight to school.
This is important, stop fooling around!
Don’t answer to strangers. Stick
with your playmates. Keep your eyes down.)
This is how easily the pit
opens. This is how one foot sinks into the ground.

—from Mother Love by Rita Dove