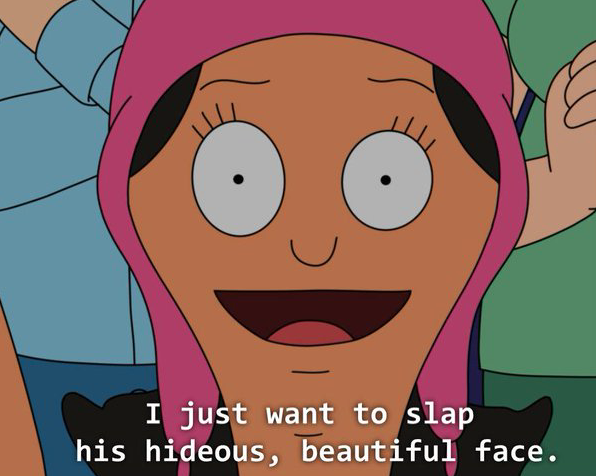 Oh, whoops! Sorry, T.S. Eliot. ’Tis the nearing conclusion of spring semester that makes me so digress. It also makes this month’s The Poets That You Meet  a wee bit on the short side. But first, a few announcements…

Anyway…on with the show (and no talking of Michelangelo)!

Recently, I watched an episode of Bob’s Burgers, an adult cartoon about a family who struggles to maintain their burger restaurant, above which they live. One of the daughters, Louise, a sarcastic evil genius, falls hopelessly in lust with the teenage pop sensation Boo Boo, from the band Boyz4Now. As she enters a contest to ride on a “grown up roller coaster” with him, she gazes into his boyish face on the computer screen and exclaims, “I’m going to ride a roller coaster with you Boo Boo, you disgusting, beautiful, garbage angel!”

This scene reminded me of some advice I received from Barbara Anderson, when I took her poetry class in graduate school. She told us that, to add tension in language, poets should “juxtapose beautiful imagery or language with MTV street slang.” I haven’t watched MTV in years, but I believe what she meant was that one should contrast the elevated with the crude. I think of Tony Hoagland’s book, Donkey Gospel, and in particular, his poem, “Dickhead.” The adult speaker opens the poem with a reflection on his survival of adolescence:  “To whomever taught me the word dickhead, / I owe a debt of thanks. / It gave me a way of being in the world of men / when I most needed one.”  He goes on to explain that “back in the world of men, / when everything was…scary, / hairier and bigger than I was” that using the word dickhead became “a song that meant the world / was yours enough at least / to bang on like a garbage can.”

I think it’s interesting the way Hoagland transforms a crude word with humor and graceful language: “…and having that / beautiful ugliness always / cocked and loaded in my mind, / protected me and calmed me like a psalm.” Of course, I love the pun, but I also like the juxtaposition of “beautiful ugliness” and the likening of swearing to the comfort of a psalm.

Well, I think it was fun, last month, to include a writing prompt at the end of my post. If you are so inclined, include (in the comments below) a poem that you wrote (or a stanza or two) that juxtaposes a version of “beautiful language or images with MTV street slang.”

Until May, dear readers!

One thought on “Garbage Angel”